Tales from Tour Guides: the stories that fascinate, perplex and inspire the Tour Guides of Peterborough Cathedral, written during lockdown.

As you visit Peterborough Cathedral and wonder at the beauty of the fan vaulting in the New Building behind the high altar, pause a moment and cast your eyes to the floor, where a number of tomb slabs declare the names and careers of those buried beneath your feet.  Amongst them is a large grey-black slab on which the name of Peter Peckard is inscribed. 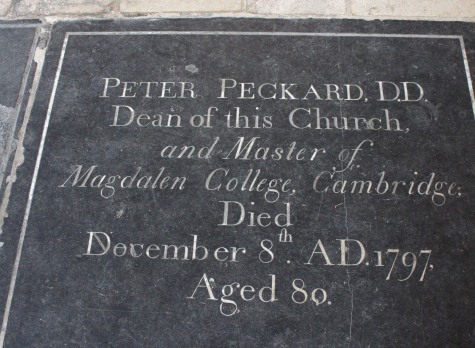 Peckard’s life spanned much of the 18th century.  Before he became Dean of our Cathedral, he served as a military chaplain in Germany and had a distinguished academic career, first as a fellow of Corpus Christi College in Oxford and then as Master of Magdalene College, Cambridge, a post to which he was appointed in 1781.

When Peter Peckard arrived in Cambridge, he already had a reputation for forthright views on a range of topics, some of which had brought him into a degree of conflict with the church authorities of the day.  One of his distinctive characteristics was that he would neither align himself with the catholic wing of the church, nor with the rising evangelical wing.  Indeed, throughout his career, he showed an unusual tolerance for a breadth of views when it came to personal conscience, whilst maintaining firm and vigorously expressed views on social responsibility. He was uncompromising in his commitment to the rule of representative government, and condemned the rule of the mob in all its guises, which he believed could only lead to anarchy.  One of his most telling essays portrayed the dangers to society of what he termed “the voice of a seduced multitude,” a phrase which perhaps has some resonance with events in the world today.

However, it was an event in 1781 that caused his lasting outrage and led to him writing a series of influential sermons and pamphlets, generating in turn the coming together of people like William Wilberforce and Thomas Clarkson, men whose names of course became for ever associated with the successful campaign to abolish slavery.

The event concerned a slave ship, which had got into difficulties approaching its Caribbean destination, loaded with a “cargo” of slaves.  The captain, fearful that water supplies would rapidly run dry, took the decision, being insured against any financial loss, to throw overboard approximately 130 slaves.  Despite widespread horror when the news broke in England, moves to prosecute the captain for this atrocity failed, since at the time slaves were equated with livestock.

Peckard became Vice Chancellor of Cambridge University three years later and, in that role, he had the duty of setting a prize essay title for students to attempt.  Still writing about the issue of human rights, he chose as his topic,

“Is it lawful to enslave human beings against their will?”

In due course, a young student, Thomas Clarkson, was declared the winner of the competition, exciting in him a passion to work to overthrow the evil of slavery in England. 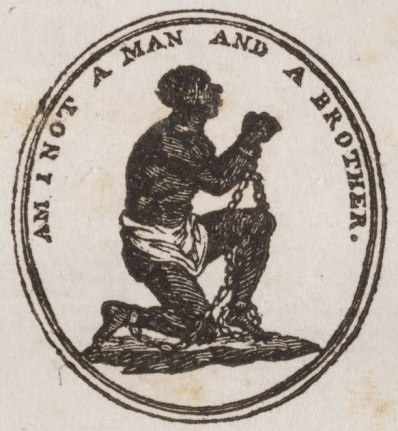 Am I not a man emblem used during the campaign to abolish slavery. The image is from a book from 1788. Source: Wikipedia Commons

Peckard continued to write on the issue, focusing increasingly on the evils of the slave trade and it was he who published the essay, addressed directly to the government of the day, which was to provide the slogan for the abolitionist movement – “Am I not a man and a brother?”

Peter Peckard continued his social and political writings after his appointment as Dean of Peterborough Cathedral in 1792, right up until his death in 1797.

A tribute to the life and achievements of Peckard was published in 1799, highlighting his concern for issues of freedom, citizenship and toleration.  In summary, the tribute declared

“If peace on earth, goodwill towards men may claim the blessed distinction of the Christian name, behold a Christian here.”

Here in Peterborough, we can be proud of our link with and grateful for the memory of “the father of the abolitionist movement.”

On 11th May 2018 Dr Rowan Williams, Master of Magdalene College Cambridge and former Archbishop of Canterbury, gave a talk on the work of Peter Peckard and its relevance to today’s society. You can listen to an audio recording of his talk on Soundcloud here:

If you are able to make a donation towards the cost of maintaining this beautiful and historic cathedral, it would help us a great deal. You can do so via the Cathedral’s Virgin Money Giving page. Thank you.

One thought on “Tales from Tour Guides: 22”